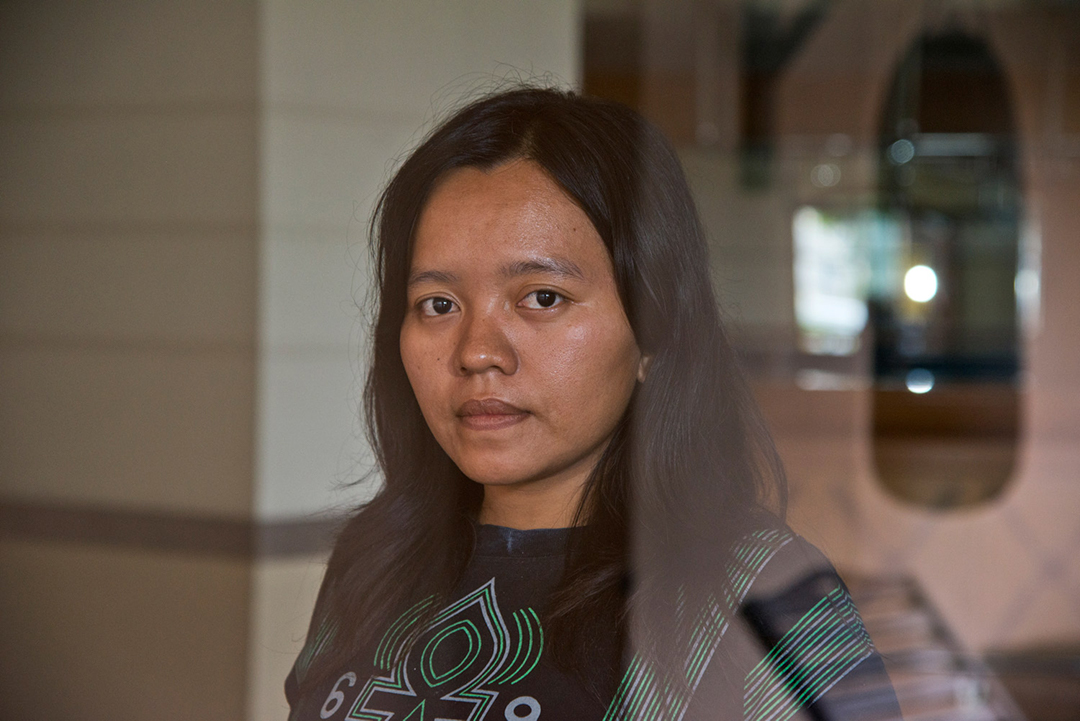 The Amman hospital staff thought it amazing that Nining didn’t die from tumbling out a second-floor apartment window onto a metal spiked fence and then the concrete walkway in the garden. She had lost her balance when the employer’s nephew groped her breasts from behind as she stood only on the sill to clean the outside of the window. The nephew told no one of her fall and she lay there for hours until a neighbour found her and took her to the hospital. The police had to go floor to floor to ask whose maid she was.

Nining came home in a wheelchair from working in Jordan as a domestic helper. In her village house in Central Java, Indonesia, she crawled across the floor for two years. She had to wear diapers because there was no bathroom inside their house. Her mother said if she ever wanted to walk again she would have to fix herself—they were too poor to pay for medical treatment. Nining willed herself upright. She walks with a slight limp now, but she walks. She has trouble working, though she hopes to open a small business selling ice cream or bubble tea.

“I first worked for two years in Singapore as a domestic maid, when I was 17. I married soon after I went back to Indonesia. We had a child, but she died when she was 3 years old. My daughter was born premature and was weak. My husband worked in a factory. Not long after my baby died, my husband was laid off by the factory and my mother got sick. We had to sell our house to pay for her medical care. She had cancer and had to have her uterus taken out. I decided to go abroad again to work. My husband agreed. In 2008, I went to Jordan.

“In the training before leaving, we were told if we have a problem to call the embassy. The problem is, we don’t have the chance to call. They gave me the embassy phone number in Abu Dhabi, but I went to Jordan. I didn’t know about the change until I was boarding the plane. And I thought I was going to work in a hotel, where I was promised a day off and a bigger salary. I was taken to a house for domestic work.

“I worked for a mother, father and three children. The father was a government officer in the military. I worked from 6 a.m. till midnight. I had no day off. I also worked at the brother’s and grandfather’s house. I was sent around to three houses. No breaks were allowed. They can’t stand me sitting down unless I’m eating. They told me all the rules up front: I can’t chat with anyone. I have to work diligently. I cannot go out of the house. Before the accident I slept in a storage room, where the washing machine was located. There was no bed but a mattress on the floor. No place to put anything, only in my suitcase.”

I was so hungry

“For meals in the morning, I was allowed one piece of bread that they folded with butter inside and a glass of tea. The only meal after that was at 3 p.m. I was so hungry. I didn’t have any money to buy snacks. I got very skinny there. At night, they prepared a meal for the kids but nothing for me. I told them I am hungry, I need dinner. The lady said, ‘All my previous maids did not have dinner, so why should you?’ For the afternoon meal, sometimes I had roti with vegetables, sometimes rice with chicken or vegetables. According to the contract, I was to be paid 1.2 million dinar a month. But the employer transferred 1.05 million to Indonesia.

“The wife often yelled at me. She would say, ‘Your work is not good.’ Even if I had already cleaned up something I’d be asked to clean it again. The wife said, ‘Indonesian people are not good in working.’ She speaks in Arabic usually, but I don’t understand her. I think she’s calling me names and being nasty. From the tone, it was not good what she was saying. But I’m afraid that if I moved to another employer I would get even worse ones. I had heard bad stories about working in Saudi Arabia—lots of abuse. People get raped, people get ironed.

“As a domestic helper, I was considered as a lower class. They had paid a lot to the agency so they felt like they had all rights on me. The always talked about it, saying, ‘I already paid a lot for you.’ I had no choice but to stay. If I insisted on going back I would have to pay for the air ticket.”

Both the grandfather and the nephew made sexual advances.

“The employer’s nephew tried to grab me sexually several times. Even the grandfather tried to rape me—he was often grabbing my body, trying to touch me. The nephew once pushed his genitals onto me while I did the dishes. He tried to seduce me, saying, ‘I like you. You’re beautiful. I want you. I want to be with you. I want to sleep with you.’ They both said this, the grandfather and the nephew. I told the madam, but she didn’t respond. She’d say, ‘Just be patient. As long as you don’t consent to it, I will talk to them.’ They never stopped.

“The children and madam were having a holiday in Turkey. I had to stay a couple nights at the grandfather’s house. The nephew, a college student, lived with him. I couldn’t sleep all night because the lock of my door was broken. The first night, the nephew tried to come into my room. I said to the nephew, ‘If you bother me, I will kill myself.’ He said, ‘Then just kill yourself. Then see when you’re dead, we will send your body using the airplane and drop it and no one will find you.’ He kept refusing to go away. He was chasing me around my room and then I dashed out the door. I went to the bathroom for guests and locked myself in all night.

“The next day it was snowing. I was tired from not sleeping. The grandfather asked me to clean his bedroom window. To reach it I had to use a chair. But they wouldn’t let me use a chair. I had to climb up and stand on the window sill. There was no balcony. While I was doing that, the nephew came in and started grabbing my breasts. The grandfather and grandmother were having a meal. The nephew didn’t say anything and just grabbed me. I’m inside but cleaning the outside. I was surprised. I was tired and scared and I fell.

“I fell straight to the asphalt, in the garden near the flowers and passed out. It was some time before anyone found me because the nephew said nothing. A neighbour found me and called an ambulance, but the neighbour didn’t know me or where I worked. I woke a day later, in the hospital. The neighbour reported the accident to the police. The police went around to all the apartments in the building saying, ‘We have a maid named Nining. Is this your maid?’”

“I couldn’t move. I had a fractured neck and a fractured backbone. I had a hole in my left foot—I lost feeling in my left foot. My left leg was the worst. I hit a kind of iron fence and part of my flesh was damaged, and it was rotting. I didn’t know where I was. I was given medicine and I went back to sleep. Another day later I woke and the female employer was there. She said, ‘It’s going to be okay. It’s okay. It’s okay.’

“Five days after the incident I had surgery. They operated on my back but I don’t know why, what they did. My backbone was crushed and I was told I would not be able to walk. The doctor said I might be paralyzed. I was taken from the hospital to the apartment. I need more surgery but they said it’s too expensive. ‘You just say here and we’ll take care of you.’ I was in extreme pain but they gave me no medicine. I cried all the time. I told them, ‘I’m in pain, I want to go to the hospital.’ They said, ‘Later, after three months, you’ll heal—it’ll be okay.’

“The case went to the court. It was quite big. The madam said, ‘If you talk too much, you won’t go back to Indonesia.’ I didn’t know it was going to court. I just saw the building. I didn’t understand what was going on but was told just to say yes. Then I was asked to sign something so that I could go home. The employers said if I don’t make a fuss, I can go home. The madam knew I knew how to read and write in English and so my insurance was written in Arabic. I just signed because I wanted to go home. Based on what I saw, they were waiting for the insurance to come. Right after the letter came, I left for Indonesia. They gave me no compensation.

“In Indonesia, I was taken to the hospital from the airport. I was two weeks in the hospital, with no treatment only meals. I had to pay around 2 million rupiah and I was only given common medicine. My mother bought me a stick walker. She said, ‘When it involves nerves you have to deal with it inside—you have to overcome it from inside yourself. You have to struggle to overcome this problem using your own strength because we have no money for any treatment.’ At the beginning, I had to use diapers and it was a problem for us to buy. For six months I needed them. My house doesn’t have a bathroom inside the house so it was difficult to get there. In my villager there are only about 20 houses. Almost every house has a daughter who goes abroad as a domestic worker. There are many success stories. If they go to Singapore, Taiwan, Hong Kong, they will have success stories. The ones who go to the Middle East are the ones with bad experiences. In my community, I’m the only one who has been injured—because the others went home with a child but no injury.”