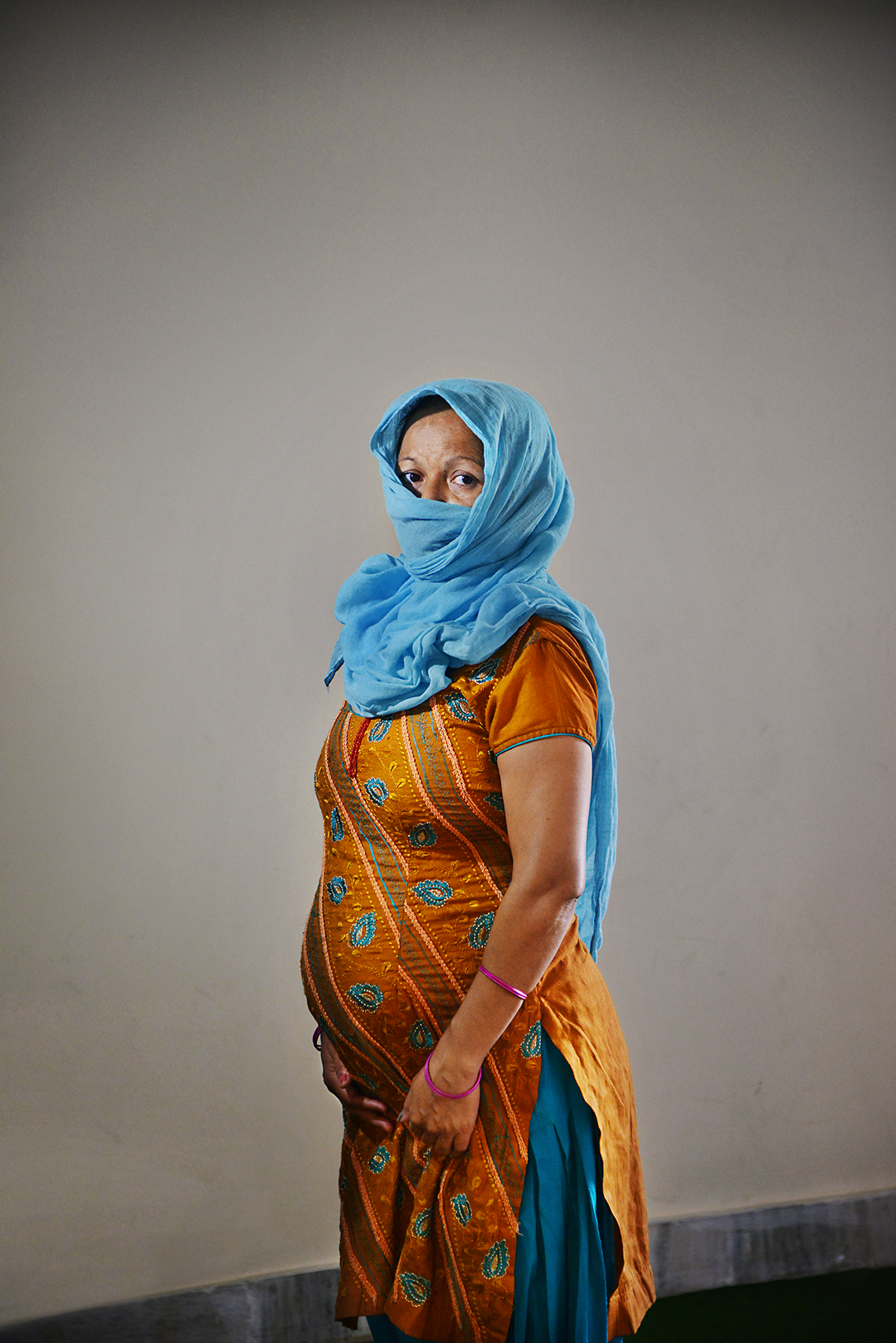 No one in Pavitra’s family in Nepal knows she spent five months in jail while in Oman. She has four children. They don’t know that she has returned to Kathmandu either. If they knew why, she believes they would abandon her. She went to Oman as a domestic worker, but eight months later was jailed because the female employer couldn’t accept that her husband had raped Pavitra. The woman insisted the maid from Nepal had seduced her husband and needed to be punished. It was to be three months in jail, but because the employers dallied on sending the money for her air ticket home, she spent a total of five months in the jail—too long to do anything about her pregnancy.

Pavitra and her husband had struggled with financial problems. Her husband worked when he could but became breathless easily and coughed up blood. Pavitra worked in construction carrying heavy loads of gravel. Her sisters and brothers had gone abroad to work and come back safely, with sufficient income. For them it had worked out well. They even returned to the same family abroad several times. Pavitra has no earnings to show for the time she was away. She waits in secret to give birth and to give the baby up for adoption.

“I used a different agency than my sisters. My sisters had training before going—training on how to do the work at the home, how to deal with problems they face, how they can save their own lives. They gave them contact numbers. It was almost 15 days of training. When I told my agent I also wanted training, she said I don’t need any. The agency that sent my sister had a huge office in Kathmandu and had a place for my sister to stay and eat food during the training. “When I asked my agent, ‘Where is your office, she said I don’t have an office.’ My sister-in-law is in Dubai and I don’t know if she is doing well. My younger brother was also working in Saudi and I had no contact with either of them.

“The husband picked me up at the airport and took me direct to the home. He and his wife lived with her mother. Her mother is Bangladeshi and the father was from Oman. He had passed away. They spoke Omani and the wife would communicate in Hindi to me. The husband worked with the police, and the wife didn’t go out to work. I was told there that I would be paid 20,000 rupees a month. Instead I was given 60 rial, equal to 13,500 rupees. The visa was free and everything was paid for.”

We were given rice, with salt and chilli
“I would wake at 6 in the morning. The Indian lady working in the kitchen had to get up at 5 a.m. I’d go to sleep at 1 or 2 in the morning. I had to constantly work. For breakfast, we had bread and tea and then at 4 in the afternoon we’d get one meal. The Indian lady made chicken or fish for the family but we never got to eat any of it. We were given rice, two handfuls for the two of us and we put salt and some chilli on it. We never had any vegetables or meat. We would be very hungry. So when no one was in the house, we would quickly prepare some food for us to eat. If they saw us eating any of the food, they would scold us. The old lady would shout at us saying, ‘You have eaten all my potatoes, so I’m going to deduct it from your salary.’ One time a small spoon was broken and she deducted it from both our salaries.

“I was beaten by the old lady, my employer and her elder sister. They used to slap me and hit me with slippers. They would hit hard. They said I didn’t work properly. I had to rush with my food. If I ate slowly, they would beat me. They used to say, ‘You cannot work over here like you do in your country. You have to work fast and you’re not allowed to go sleep in your room at 9 or 10 p.m., only when we allow you. When you eat, you need to eat fast.’ My husband called me one day and said there isn’t enough money for food and I said I would ask for my salary. When I asked, the woman employer beat me instead.

“I got into a kind of habit. My mind was always in Nepal, so it didn’t bother me how much work I had to do. I didn’t even think about it, having to work for 24 hours. If the tasks were finished, the old lady would say, ‘Come and massage me now.’ Sometimes the woman employer was okay. If she was resting, she would say, ‘Come rest for a while.’ But if the old lady saw me resting, she would immediately tell me to do some work.

“The older mother was so terrible that nobody worked there longer than five months. I lasted one year. The Indian woman was very slow and very big. She did her work slowly. After I finished my work, I had to help her. But she never finished her work so that she could help me. She got body aches all over. I used to massage her in the evenings because they didn’t take her for treatment. When I was taken to the jail, the Indian woman cried. She said, ‘I have no friend now.’”

If you tell my wife, I will kill you.

“Usually the husband went to work in the morning and came back late at night. On that day, he took his wife and mother-in-law out in the car and returned alone. I was cleaning their bedroom. He came in and later I realized he had shut the door. He came into their room, turned on the TV sound very loud. I said, ‘I will tell your wife if you do anything.’ He said, ‘I will shoot you before you can tell anything.’ ‘Why would you shoot me, I haven’t done anything to you?’ He said, ‘The law in your country is not like over here. If I go to the police, whatever I tell them they will believe.’ After he had raped me, he threw a 50 rial note on the floor and he went away for three days. He didn’t come back home. When he attacked me, I shouted at him and fought him and he said, ‘If you tell my wife, I will kill you.’ And he just threw the money at me and left.

“The wife came back a half hour after he left. I was sitting on the bedroom floor crying and the note was still there. She said, ‘Why did you steal my money?’ I said, ‘I didn’t steal your money. Your husband raped me and threw the money at me. You take your money back, I don’t want your money.’ But she didn’t believe. She said, ‘You’re telling lies and it’s not true.’ The wife accused me of seducing her husband.

“When I missed my first period after the incident, I told my employer, ‘Your husband did this to me. Either get me treated or send me home.’ If they had sent me home straight, I could have been treated. The man filed a case against me saying I had gotten pregnant by somebody else but was blaming him, which is why I was taken to jail.

“When the husband accused me of telling lies, he slapped me twice. It was in the house that he slapped me and said that I was telling lies. When he said that, I told the woman the only time I can go out is to throw the garbage. Ask you husband if he has ever seen me go out of the house other than to throw the garbage. No one really wanted to listen to what I was saying.

“When I told the woman that I had missed my period and might be pregnant, she didn’t say anything and went to her mother. Then the old mother came to me and asked what happened. She said to the daughter, ‘Why didn’t you tell me when it happened?’ The daughter said, ‘I was scared so I didn’t tell you.’ The mother went out and came back with a test kit and asked for a urine sample. It came out positive. The mother and the daughter had a conversation while I worked. Then the daughter said, ‘You can’t stay here. You must go back to your country.’ I told her, ‘If you send me back, I will go.’ She said, ‘Okay, I will get you a ticket.’

“She took me to the police instead. And then she left. I waited a while and said, ‘Where is my employer?’ The policeman said, ‘Oh you’re not going back home. We have to keep you here.’ I didn’t ask for any reason. I thought the employer must have told them the version that the husband had said. I told them what happened. From that small jail they took me to a bigger jail after one month. Then I was taken to a court one day. The man did not come, but his wife was there. She said, ‘It’s this woman’s fault and she must be punished for it with three months in prison. They said, ‘You’ve been accused.’ Then they handcuffed me and took me back to the big prison.

“The police had been approaching the husband to pay for the ticket and they kept phoning and he kept postponing. The police didn’t even give my passport back. The employer gave the passport to the police but they said in this type of case they don’t give back the passport. They gave me some kind of document. No one from the Embassy knew about me. No one visited. There were lots of other Nepali women in the prison but I never saw any Embassy person there. The Nepal Embassy in Saudi Arabia looks after Oman. If I get through this okay and I don’t die, I want to return to my husband. He doesn’t know I’m here. I lost touch with him while I was in jail. I used to phone him with my own phone if I had the money. When I was taken to prison they brought me my things but not my mobile phone. If my family, especially my husband, finds out, they will abandon me.”