The roof of her family home leaked whenever it rained. Haryatin, then a teenager, had been working as a housemaid for local families in Blitar and Surabaya provinces in eastern Indonesia since she was 8 years old. But the salary was never enough to repair the house. And her mother, a widow, was in constant debt for the food she bought for her three children. A young neighbor woman had gone to Saudi Arabia to work as a housemaid and said it had been a good experience. Not yet married, Haryatin decided to go also but waited until she was the legal age, at that time, 20 years. She went three times over a ten-year period. The third time in Saudi Arabia she says she worked for a person who was like a devil. The woman, Fatma, had nine children when Haryatin arrived. By the time she left, she had a tenth child. But her husband lived with another wife. The woman employer repeatedly struck Haryatin on the head with different objects or banged her head against a wall. Haryatin’s eyesight began to blur. When the woman rubbed the baby’s feces-filled diaper in her face, she could still see it. But when the woman hit her on the head with a metal pipe, she lost her sight completely. Back at home in Indonesia and still blind, she no longer works.

Haryatin’s husband remembers deep sadness when his wife finally returned. “I had no word from her for nearly three years. She told me what happened, it was like a magician. I thought, ‘What has happened to my wife?’ I can’t express through words what I first thought.” 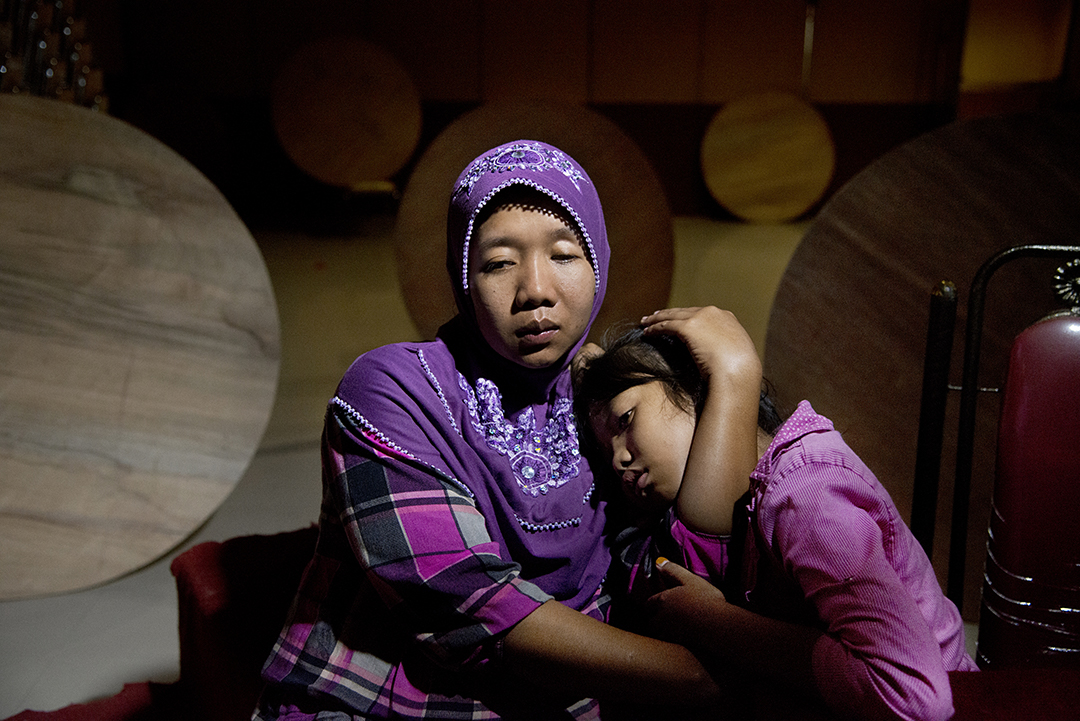 “It was the first time I went far away from my mother. But I had committed to support my family and I must do everything given to me in the foreign country as good as possible. After I went home the second time, my mother remarried. So I must pay for the wedding feast myself. Then I ran out of money. I had married in 2003 and my daughter was now 2 years old. I decided to go abroad again. Actually, I was so sorry to leave my daughter, but I think my daughter needs more money for school. My husband was always looking for a job but he never found one. He did whatever he could do, but the income was very small.

“The contract said the employer is Hayya. But when I go to the house, I worked for Fatma, her daughter, who had nine children. They were just moving into the house. Without giving any time to rest, I must work to make the house neat. They were not friendly at all. They looked at me like a stranger and suspicious. I tried to do my best for the master to be nicer or friendly to me. I guess what I did was not quite right. After one month, I met Hayya, who I was supposed to work for. She was nicer than the daughter. When I told Fatma that I wanted to move to the mother’s house, she was very angry. She hit me using the handle of the vacuum cleaner until I was swollen. That’s when the bad treatment started. From then on, I always was hit using whatever she was holding. Any bad treatment you can imagine, it happened to me. Fatma was always hitting me, until I couldn’t feel my body as usual. Once I asked, ‘Why do you hit me?’ She said, ‘You are sweeping like a woman who has a desire for a man, like flirting.’ It didn’t make sense.”

“I almost never slept. I was the only maid in the house. When I’m washing clothes I’m falling asleep. All the children asked for my services, even at midnight they were asking for food, and I must give it. All the work must be done by me. The school uniforms must be washed every day for nine children. The first son didn’t want to take off his clothes. The clothes must be used the next day and I must find them. If I don’t clean them, I would be scolded or tortured by Fatma. Once, the children woke me in the middle of the night wanting to eat. I fell asleep afterward but the plates weren’t washed yet. I was drenched with ice water. I said, ‘What’s wrong?’ Fatma said, ‘The job isn’t finished yet—why are you sleeping?’ I had no bedroom. I slept in the place where I ironed the clothes and I had a small mattress. It was a storage room where they kept the food supply. She treated me like an animal.

“I usually changed the diapers of the babies. One time the mother had to do it and she got angry. While I was washing the clothes of the first son, she rubbed the diaper with poo into my face because I hadn’t changed it. It was about 3 a.m. I must wash the clothes while my face was full of poop for about an hour. She folded a cable and hit me while I washed the clothes and my face is full of poop.

“Once, after I got a bad treatment, I phoned my husband and he phoned the agent in Jakarta. The agent said, ‘Your wife can’t go home before the contract ends.’ I got permission to use the phone at that time. But anytime someone phoned me I was hit. She would say, ‘Do you think I take pity on you when you are sick? You are not my relative. You have no relation to me. Do you think I take pity? No.’ After seven months I tried to escape from the house. I jumped from the second floor to a garden space of the neighbour’s. The owner found me but kept silent. After three days, Fatma saw me and took me home. Maybe the owner was afraid to take me in because my face is full of swelling. Of course I asked for help—‘Please help me sir.’ But he was afraid to look at me.

“But what made me blind is when I was hit on the head with a water pipe. Fatma often hit my head with her big hand. I might faint and see something white. She would pull my hair and shake my head right and left and I hit the wall. My vision was blurry. When I was rubbed with the diaper, I could see the poop. One month after that I couldn’t see anything, only darkness. It was Ramadan. I was trying to find the blender and it wasn’t in the usual place. I think it was a kind of trick, teasing by the children to hide it. Finally, the children found it upstairs above the cupboard. Because I couldn’t find it, Fatma hit me with a water pipe. I was running everywhere, I was afraid. I was hitting the cupboards, hitting the stove, I didn’t know where to go, I couldn’t see anything, until the glass of the cupboard broke. She was saying, ‘You are just pretending. You are not blind.’ But then she said, ‘I let you be blind—it is better for you to be blind completely.’ Once I had said, ‘If you don’t like me, please send me to the office, please send me home.’ She said, ‘How nice, how lucky you are to go home. If I don’t like you, I just hit or I kill you.’”