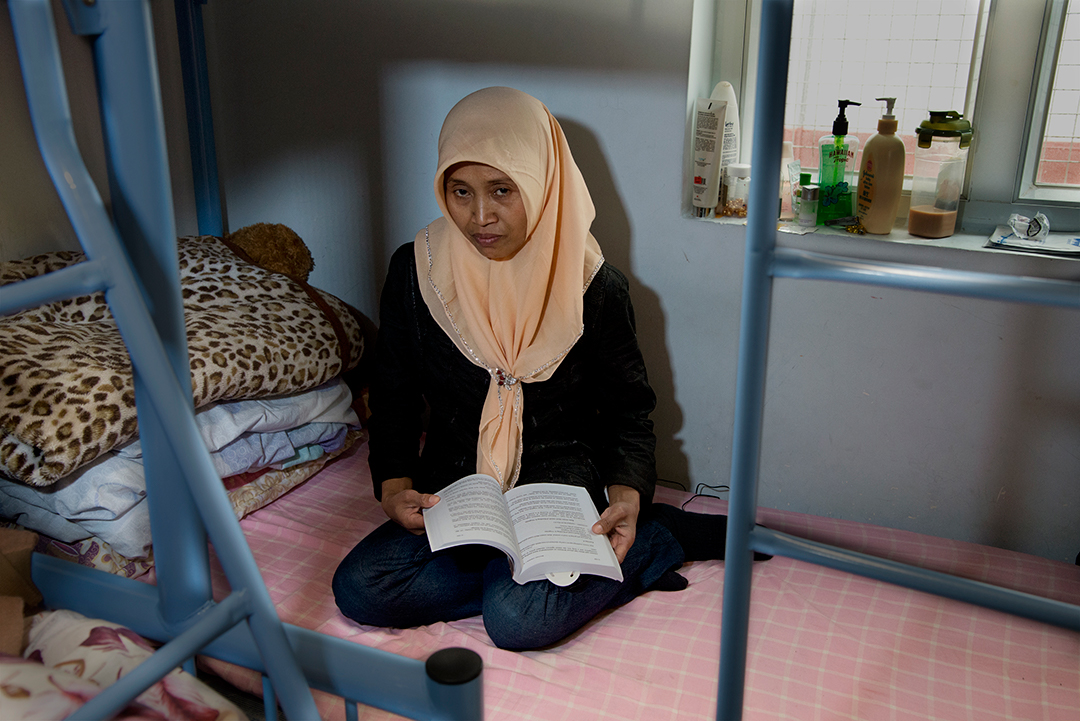 A middleman broker went to Yanti’s house in East Java, Indonesia and introduced the idea of going to Malaysia as a domestic worker. Many of her neighbours had already gone. She was a single parent, divorced from her husband. She earned little money as a farmer and, like so many mothers, what she wanted most was for her children to finish school. Yanti first went to Malaysia and then to Hong Kong as a domestic worker so that she could educate her two children. After years of working in Hong Kong, she ran away from her female employer who was harassing her sexually. She does not want to be recognized because the police are still investigating her case. She has filed a case with Hong Kong’s labour tribunal seeking HK$80,000 for lost wages and annual leave. She would like to continue working in Hong Kong because, as she says, not all employers are abusive.

“I was a farmer at the time. At first I was confused about what to do because the children would have nobody to take care of them if I went away. But because of the economic problem, I wanted to make sure they had a good education and so I decided to go. It would be for two years. I had only heard stories about illegal workers who were arrested by the police.

“I stayed in the training centre for one month. I had nothing to do but wait for the visa. I didn’t need language because we spoke the same language—Malay. I was worried about how to work in Malaysia but the agency didn’t give me any training. My monthly salary was 350 ringgit but I had to the agency 300 ringgit a month for the first three months. I had no problems there.

“I went back to farming for two years after working in Malaysia. My children were still so small then and I needed more money. So I decided to go to Hong Kong. Everyone says the salary is higher in Hong Kong. I waited eight months in the recruitment centre before going to Hong Kong. I had an annual leave every two years. After four years, I went back to Indonesia, for one year. But the children always needed money for the education fee. I kept going back to Hong Kong.

“The first time in Hong Kong, the employer was very good but I was only paid HK$2,000 a month even though the minimum salary was much higher. At the time, it was a lot of money when I sent it to Indonesia. I started working at 6 a.m. and went to bed at midnight. I never thought I had long working hours because the employer treated me very well. If I don’t want to eat pork, the employer gave me money to cook my own food. The employer would leave the cleaning schedule to me—I can do the cleaning on my own. I had my own room. Sometimes the baby slept with me and sometimes with her mother.

“I was with my last employer for three years, three months and then I ran away. It was a Chinese employer, a university professor with a husband and two grown children. I cleaned the house, cooked and went to the market. My full salary was HK$3,740 a month, but I had to pay a six month-placement fee—every month I paid HK$3,000. I had my own room. I woke at 5 a.m. and went to bed sometimes at midnight or 1 or 2 in the morning. I had to wait for the female employer to go to bed and massage her every night.

“I had the day off on Sundays and public holidays. I could go out at 8.30 a.m., but before I could leave I had to finish my work. I had to come back at 6 p.m. and then I had to work—cleaning or marketing or cooking. I feel so uncomfortable when I have a holiday because if I go back late, the employer will be angry.”

She would slap me and then kiss me

“From the start she was slapping me and pulling my ear. If I make a mistake, she would hit me—once every two weeks. Just before I finished the two-year contract, she started treating me really well. She treated me like family. So I decided to renew and hoped that she would be good like that in the future. She was still angry with me after I signed the contract. But she changed. She would slap me and then kiss me and say, ‘I like you’, or ‘I love you’. It scared me. She would kiss me even in front of her husband. He would just say, ‘You’re crazy.’ They slept together. I don’t know why she was doing it. Their relationship looked good. They didn’t seem to have problems.

“I never saw a female employer kiss the helper. The employer said, ‘You are crazy.’ I think, ‘You are crazy—not me crazy.’ I don’t know if she has an illness. She is a professor, she should not do like this silly thing. She would put her hands on my shoulder and push me and kiss me on each cheek. This happened once a week or so.

“She’s very fat and very big and when she hit me it was very hard. On the ear it really hurt. After she would hit me, she would give me medicine. Every time I see the employer walking around, the hair on my arm stands up. I try to survive with her and to finish my contract. But after she kicked me down the stairs, I felt really afraid. So I left on my day off. Someone in the cleaning service in the university helped me find the trade union representative. The person in the trade union took me to the hospital and then to the shelter.”