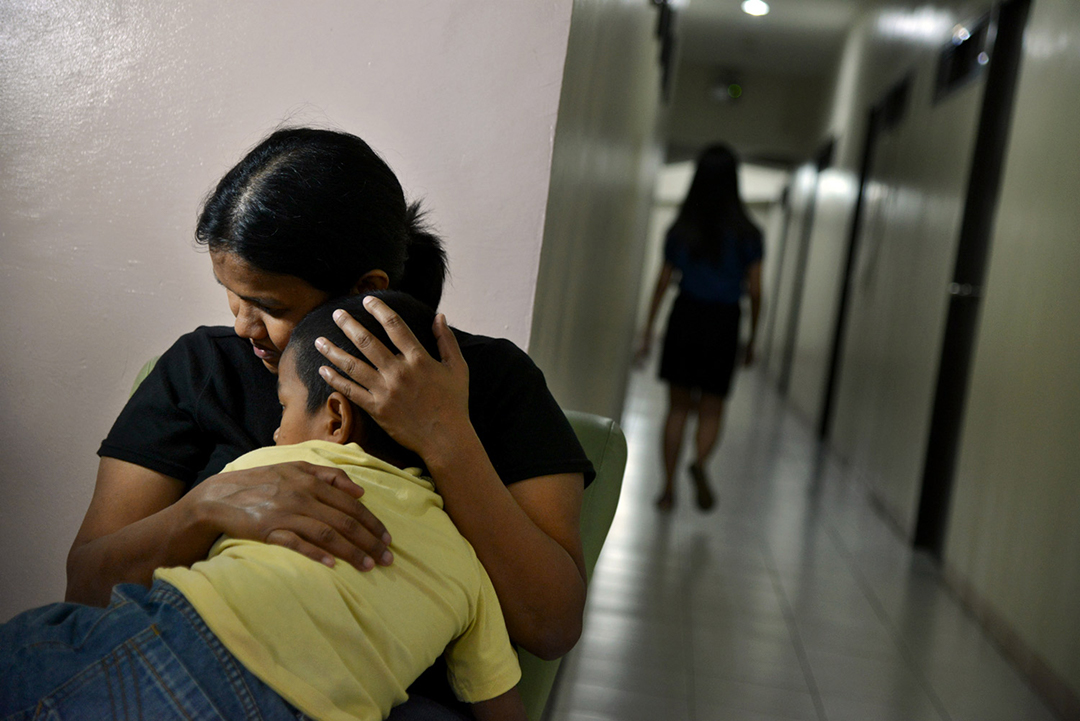 Mary Grace wants to tell her story but doesn’t want to be recognized. She had gone to Malaysia in 2013 because she and her husband were struggling with school fees and with having enough food to eat. They had missed eight loan payments for the taxi tri-cycle that her husband drives for income in Philippines and were about to lose it. In Malaysia where she went for domestic work, she was essentially starved in both houses where she was placed; she left the first employer after one month because she was starving and the work was excessive that had not been specified in the contract. It was the same condition with the second employer. After working with the second employer only two weeks, she passed out in the chicken section of the wet market while they shopped. She was taken to the hospital, but when she woke up in the ambulance, the attendant was touching her breast and then kept inserting his fingers into her vagina. He pulled down his pants but before he could do anything the ambulance pulled into the hospital. The nurse told her to be quiet when she tried to tell them what had happened. When she said she wanted to go home, the agency owner called her names and cursed her. She returned to the Philippines not having to pay the expenses but not having earned anything.

“But I’m not lucky because in the first week staying with the first employer I didn’t eat much. I ate coffee and one biscuit at 6 a.m. After that, we took our lunch at 3 or 4 p.m. and I just ate noodles. They don’t eat rice. And I drank water, drank water and water again. In the evening, I had some rice and then their excess food. If they don’t have excess food, I don’t have a meal. They said, ‘You just drink water.’ They wanted me to drink water, but I had so much work. When I went to Malaysia I weighed 68 kilos; when I came back, I was 56 kilos

“I signed a contract here and then a different one in Malaysia. The contract here said I would work in one house but when I go there it is three houses although it’s only four people. One house is like a rest house. The third house is a store room; the employees of my employer stayed there so I had to clean it. The employers owned a resort. When the female employer would tell me something to do, she would shout, ‘You run when I tell you something. All my employees, they run—you walk.’ But I am running. She shames people, always shouting at the workers.”

“I woke at 5 a.m. I had to sweep and mop the main house—three floors and seven bedrooms—and then prepare the food for the animals—two dogs and two rabbits. I only cooked sometimes; they usually ate at their resort. “I am a hard-working person, so if they give me enough to eat, the work is okay. But it’s not enough. I would eat the food meant for the rabbits. I get the skin of the carrots and I go to the bathroom and eat it. They treated me like an animal. They have CCTV and in the evening they looked at the camera to see what I was doing all day. There was no day off. I couldn’t use the telephone. I couldn’t leave the house. When the family went out, they locked the gate. The agency took my passport.

“After three weeks I asked the agency for a different employer. When I asked to leave, the wife wouldn’t talk to me anymore. She said, ‘Why you come here and then you go?’ I said, ‘Because ma’am, you don’t give me enough food.’ I know water is good, but… I asked for my salary and she said to talk with the agency. The first three months’ salary went to the agency. I was not paid.

“The agent picked me up and took me to another house. The agent told me I was to work in one house with four people in the family. When I got there, they were seven people. The employer, Janice, had two houses, each with two floors. When I finished cleaning the first house we have to travel 40 minutes to the second house—the house of Janice. The first house is the sister of Janice, a stage 4 cancer patient. I prepared fruits and vegetable juice for her. She also shouted at me. The agent never told me about a cancer patient.

“My room was full of boxes, mosquitoes and so many cockroaches. The employer told me, ‘Just clean the space for your body. That is your room.’ My room is a stockroom for food. It’s so dirty. I don’t have lights or an electric fan. I cannot sleep well. Always I cry. I sleep at midnight and wake at 5 a.m.

“I ironed from 7 p.m. to midnight. After ironing, the employer would tell me, ‘You wash the plates.’ I told her I cannot, my hands are numb. She said, ‘Just finish your work.’ It’s so hard for me. One day I had a fever. My eyes were so hot, my bones were painful. But she doesn’t give me any medicine. She said, ‘No, you’re just pretending. You don’t want to work.’ I said, ‘Look at me, touch me.’ She just ignored me and left for her shop.

When we were in the market three days later, I fell down in the chicken space. When I woke, I was in an ambulance but the attendant had his hand on my breast. He had pulled down my panties and inserted his two fingers into my vagina. I told him to stop, ‘Please don’t do this to me.’ He had pulled down his underwear … then we pulled into the hospital. It is like I am an animal. But I am a people. Why does he do that to me? I told the nurse the man inserted his fingers. She blushed but she ignored me. She said, ‘Stop. Don’t talk. Or else I won’t give you medicine.’

“I wanted to go home after that. But the owner of the agency is so bad. He said to me, ‘Fuck you. You bitch. All your family, your young son will die. You, fuck you. You are a bitch.’ Then he threw his coffee mug at my face. He wants to give me another employer. I don’t want to work anymore. He just wants the money from the employer. He is not nice. I think he’s not Malaysian. He also has an agency in Singapore.

“In pre-departure in the agency office in Manila, I heard so many bad stories. Some workers were coming back after one week. Some said the contract was not the same as they signed in Philippines. Someone said she was told it’s a small house but when she got there it’s a mansion, with many children and animals and the food is not much. I just kept telling myself they are unlucky. I just pretend I am lucky when I go there. One woman said people in Malaysia threatened to poison her. When she hung the clothes outside, she jumped the gate and escaped and went to another house and called the agency.”